ABOVE AND BELOW: How do geothermal power plants work?

Geothermal energy sometimes finds its way to the surface through volcanoes, hot springs, and geysers therefore being a valuable asset to countries situated along the Pacific Ring of Fire where volcanic activities happen frequently.

According to a 2016 study by the Geothermal Energy Association, the Philippines, along with 80 countries around the world, utilize this kind of energy source with 11 operating geothermal power plants all over the country.

But the production of this kind of energy does not simply mean digging a hole through the earth’s surface and conducting the heat to be used aboveground. There are actually three types of power plants that generate geothermal power in different ways: 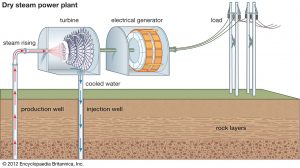 These are the most common type of geothermal power plants, accounting for about half of the installed geothermal plants in the world. It works by piping hot steam from underground reservoirs directly into turbines from geothermal reservoirs which power generators to provide electricity. Afterwards, the steam condenses back into water and is piped back to the reservoir through an injection well.

The Geysers Geothermal area is the world’s largest dry-steam geothermal field which, during its peak production in 1987, served 1.8 million people in San Francisco, California.

In the Philippines, the Tiwi Geothermal Power Plant in Albay and the Palinpinon Geothermal Field in Negros Island are some of the dry-steam plants operating in the country. 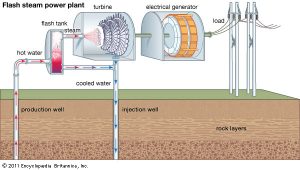 For flash steam plants, instead of pumping hot steam, this pumps hot water directly into a “flash tank” on the surface.

The flash tank is at a much lower temperature compared to the high-pressured fluid, causing it to convert into steam. This, in turn, powers the turbines and, when cooled and condensed back to water, is pumped back to the ground through the injection well. 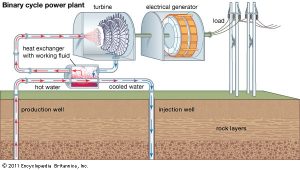 Unlike the other two that directly operates, this has a heat exchanger that serves as a channel between the geothermal reservoirs and geothermal turbines. This heats a second liquid into steam which powers the turbines that drives a generator. The hot water is recycled and injected back to the earth and the second liquid is recycled through the turbine and back into the heat exchanger where it can be used again.

The Makiling-Banahaw (Mak-Ban) Geothermal Field in Laguna was the second geothermal resource that installed six binary bottoming-cycle plants in 1994.

Now, while geothermal power plants allow us to generate heat below to be utilized as energy above, geothermal heat pumps are a different thing. This allows us to harness and maintain the temperature in an establishment. This will be further discussed in the second part of the series “ABOVE AND BELOW: What are geothermal heat pumps?”

Geothermal energy is said to be one of the best ways to utilize renewable energy — it is, in essence, environmentally friendly, it can be a stable source of energy, and it has massive potential. The AP Renewables, Inc. (APRI) is one of the top geothermal energy producers in the Philippines with facilities in Albay, Laguna, and Batangas. Other companies such as Chevron Malampaya LLC. and the Philippine National Oil Corporation-Exploration Development Corporation (PNOC-EDC) also aids in the development of geothermal energy in the country.

Generally, harnessing and utilizing renewable energy is one of, if not the best ways to power a country without greatly compromising the environment; and being situated close along the Pacific Ring of Fire, the Philippines poses an even greater potential for geothermal development.

The Republic Act no. 9513 or the “Renewable Energy Act of 2008” paved the way for the improvement of renewable energy in the country. It allowed the implementation of fiscal and non-fiscal incentives for all renewable energy sources as well as the privatization of geothermal energy. According to a study, renewable energy capacity may be doubled by 2030 — majority coming from the geothermal sector.

This portion of the energy sector will not only diversify the world’s energy supply but will also  create economic development and advancement in society and for the masses; and as stated in an Inquirer report, “harnessing geothermal energy is also an act of harmony with the environment.”

All in all, the ability to utilize renewable energy proves that man and environment can be one; that the society can live off from all available resources without imposing adverse impacts on the environment; and the presence and development of geothermal energy and geothermal companies is a big step to not only meet energy demands at present but to also promote sustainable energy.